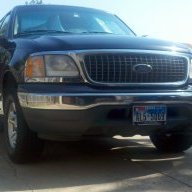 I can't believe I'm admitting this, but I just got through replacing all 4 shocks for the 1st time on my 2000. Honestly though, I've never felt like the truck had any detrimental handling or driving effect from the old shocks. I guess we'll see if I sing the same tune after driving it with the new ones. Rockauto sent me one of those "wholesaler closeout" emails last week. I usually stock up on wiper blades, oil filters, etc. I noticed shocks on the list this time which prompted me to check my maintenance log on the truck.....170k miles on the original shocks. Here's a couple of pics of the new next to the old.....


You must be registered for see images attach

You must be registered for see images attach

The old ones still have a lot of resistance, not as much as the new, & they don't extend back out on their own. The bushings were all still in pretty good shape. Ford was using some good quality shocks for that run of trucks I'd say.

The replacement went pretty easy until the last(left rear)one. Some PB blaster was needed on all the bolts/nuts. No signs of excessive wear on any of the hardware. Both rear shocks have a clip-on capture nut on the upper mount. You back the bolt out & the clip-nut falls out when you pull the shock out at the top. The trick is re-installing the new shock & clip-nut at the same time in such a tight space from under the truck. The left rear is really a booger to reach with the fuel tank & associated tubes on that side. It's just dumb luck the left rear was my last one, if I had started with it I probably would opted for a shop to do it. With the other three done I had incentive to reach a bit farther I guess. I ended up having to jack up the rear axle(with jack stands of course)high enough to slide under it from the rear. My long arms were just able to reach the upper bolt head, I don't know how a short-armed guy could do it without dropping the tank.

I'll have to report back on the new ride qualities later. The day after the shocks arrived I started hearing strange noises from my engine compartment. It's the dreaded sound of a chain dragging on a guide. New timing set, gaskets, & oil pump are on the way......

Keep us posted! Looking to replace my '99 expy's stock rear shocks with 209k on the clock

Unseasonably cool day today, so got the valve covers & front cover off this afternoon. Hopefully tomorrow won't be too bad either, get a chance to change out the kit & oil pump.