They fit on the shocks just fine. The issue is that coils are too big to work with the seats. 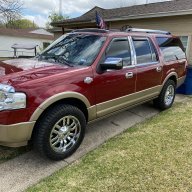 Whatever was stock on my truck 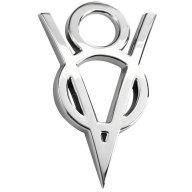 Scott Carden said:
Did you change coils? Ford makes a couple size springs. One for a 2” seat the other for a 2.75” seat.
Click to expand...

I did on my rears. The springs that were one were from the previous quickstrut set and were sagging or else weren't as "tall" in regards to loaded ride height. Gave a little backwards rake and looked like dogshit. I put Moog units in from rockauto (decent price, actually) and brought the rear up about an inch, inch a quarter, roughly. My fronts were still motorcraft springs, shocks, etc, so those springs are still there, albeit with Bilsteins now. My ride height is back to level, though I don't (think I have, anyway) have current pics of it right now. Supposing it's not a thing to get some, so stay tuned to this channel, we'll be back after this word from a made up sponser...lol

Seriousness again; the Moogs are a a wee bit bigger in dia, maybe a 16th of an inch, but actually have about an extra coil and a quarter. Ride is wat I was expecting, but the previous springs were either shot, or ****, or both, so honestly, a little stiffer ride is expected and appreciated. It's not as if these things are 1 ton super duty trucks, nor are they Lincoln town cars, so, there will be a little roughness in what amounts to a 2.5 ton SUV on a half ton truck frame and all.
T

Anyone have experience with these KYB units?

Installed them on a 2012 Limited EL that had the air springs removed. The all in one strut initially installed was way too soft, and the spring seat was welded to the shock. These are the performance version and do a fantastic job controlling the rear end...both loaded and unloaded. No More Bouncing!
You must log in or register to reply here.
Share:
Facebook Twitter Reddit Pinterest Tumblr WhatsApp Email Share Link