hellohithere said:
Just spoke with the Discount Tire sales rep. The Defender LTX in the 22" 114H XL rating is in pre-release and is not in stores yet. He is going to check with Michelin when they will be available and get back to me.
Click to expand...

wrg404 said:
That aside, after reading tons of reviews wound up buying the Pirelli Verde All Season Plus II. I think I need to take them back and have them rebalanced because they seem to ride a little rough above 60mph, but otherwise great so far especially in the rain we have been having in GA
Click to expand...

I had a 15 plat EL with 22's and went though three sets of the the pirelli verde all season plus ii.

I thought they were a great tire (snow, rain and dry) and I am going to put them on my 20 plat when the hankooks start to wear out. I don't like the factory hankooks.

Those pirellis rode like a caddy up to 100mph.

I did have a very good tire shop do the balancing.

After writing this I might even just get the pirellis now and I only have 5k on the hankooks.
3

I would only use tires that Michelin approves for your truck, for the 22” it is the Premier LTX only.
I have owned 1998, 2008 and now 2018 Expeditions. The ‘98 I had Michelin LTX as replacement tires and they were outstanding.
On the 2008 which had OEM Pirelli Scorpion All Season, tread wear was only fair and had a few punctures. On my 4 X 4 the front tires tended to wear on edges. The Scorpions were very smooth, quiet and towed well. I replaced with Michelin LTX and had lost about 2 mpg. I had Discount Tire replace with Continental Cross Track. The Continental’s performed ok, tread life was similar to Pirelli’s (just ok) but towing was not near as good as the OEM. Gas mileage was on par with the OEM tire.
On my 2018, I replaced Hankooks with Pirelli Verde All Season Plus II. These tires have been my favorite of all. They have much better wet traction than the Hankook’s, they tow well, they are quiet, get equivalent mpg’s as the OEM tire and the steering response is noticeably better. At 14k miles on these tires they seem to be wearing well and remain performing like new.
My two other vehicles have Michelin Tires. I love Michelin’s, however for my 22” rim Expedition I am forever sold on Pirelli.
M

I've had good experience and mileage with smaller Michelins on different vehicles but ratings from Tire Rack suggest that there may be some better choices. 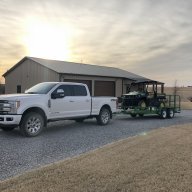 I wouldn’t call the Defender aggressive looking. I’ve ran the Defender M/S2 on our last two Expeditions with good luck.


You must be registered for see images attach 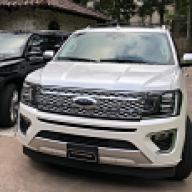 
You must be registered for see images attach
Click to expand...

The Defenders look great in this picture. Thanks!

For those who are interested in the Defenders, Michelin customer support got back to me. The Defender in 114H will go into production in June and be released in July this year. 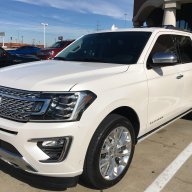 hellohithere said:
Just spoke with the Discount Tire sales rep. The Defender LTX in the 22" 114H XL rating is in pre-release and is not in stores yet. He is going to check with Michelin when they will be available and get back to me.
Click to expand...

Currently sitting in Discount Tire because my trash Hankook Dynapros picked up ANOTHER nail. The rep just got off the phone with Michelin...just as @hellohithere said, the new Defenders with the 114 load rating are being released at the end of June.

Hopefully Discount can patch this newest nail and I can keep these pieces of garbage rubber rolling until then.
W

I feel you on the nails. Why I replaced all 4. I had 3 nails in 6 months, all in non repairable areas. I don’t know that I can blame the tire, but I was just driving on city streets, no construction or other areas I would expect to pick up a mail.