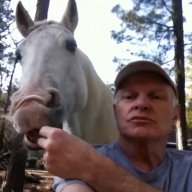 Hi, I'd like to properly introduce myself to the forum and maybe participate in some of the discussions. A decade or so ago, for economic reasons, I began maintaining my 1999 Expedition EB 5.4 and my wife's 2005 F-150 FX4 5.4. There were a lot of things I didn't know but I can say now that, after 10+ years of hands-on experience, there's even more.

Working on my trucks started out as a chore but I've learned enough to enjoy it now. Being able to properly fix something for $75 that would cost $350 at a shop is fun in more ways than one. These are amazingly complex machines and I respect both the people who engineered them and those who understand them.

As of this posting, I'm restoring my Expedition cosmetically and mostly finished with the exterior and engine compartment. The painting and wheel refinishing was professionally done but I'm doing everything else. I now fully understand why there's so little black plastic trim on later model vehicles.

Two pictures, of me(on right) with my friend who in 2003 sold me the Expedition through his dealership and who recently encouraged me to restore it. The other picture is what I think is the most dramatic improvement in appearance. 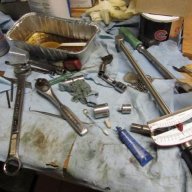 That engine bay looks really nice when detailed. I have to do mine but it's on the long list of things to do. I also have a 99 EB, it's at about 185K right now.
OP
OP

Thanks @macbox, the engine bay was the last item on my list. I'm still amazed at how well it turned out relative to the effort and skill required. So much so that I posted a thread about it:

Pictures: 1999 5.4 engine bay before and after Cerakote. Details if anyone is interested.

Never tried Cerakote, but I've gotta say it it looks great, I checked out their website and it seems like an interesting product. My latest buy is Car Guys plastic restorer, which works really good on some of the plastic trim. Still have not gotten around to detailing my engine bay.
OP
OP

It's 3+ months since I did the engine bay, running boards, window seals, etc. and they still look fresh. Which is amazing to me, considering what they looked like before and how little expertise I brought to the task.
You must log in or register to reply here.