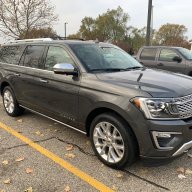 Good question. One that I won’t be able to answer though, I have zero intention of using a dealer or lube shop do this. Lowest skilled, lowest paid (I assume on both of these) person doing the most frequent maintenance activity...somewhere along the way something isn’t going to be done right. Bolts left off the cover. Over tightened drain bolt. Too loose/too tight filter. Wrong filter. Wrong oil. No thanks. I’ll just do it myself. I have very little faith in most people honestly. Want something done right, do it yourself. Heck, the Grand Cherokee I owned before this I traded to the dealer, then my dad decided he should have bought it from me and got it back from the dealer. They changed the oil even though I had just done a change with Mobil 1 500 miles prior. When it came time for me to change the oil I could not get the filter off! It took me an hour of screwing around and applying pressure to finally loosen it. Affirmed my distrust for lubies... 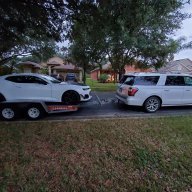 Here's my first interval analysis at 7,600 miles on the factory oil. The majority of these miles were towing my 4000lb track car and 1500lb trailer with spare wheels and tools in the Expedition. 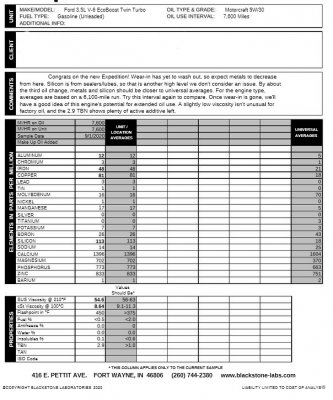 Blackstone results came in today. This sample had between 2,000 and 3,000 miles of towing. 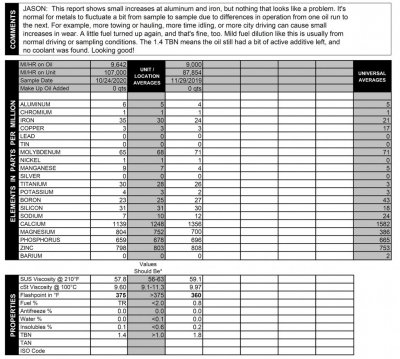 I decided to do the first oil change early on our '22, as discussed elsewhere on here, and did it at just 991 miles. The oil analysis below seems to show that wasn't a terrible idea to get that stuff out of there, but it's interesting to see how similar it is to some of those that went much longer on the factory fill.

I have used Blackstone only in the past for several years, but due to cost and reading about fuel dilution testing accuracy, not to mention curiosity, I decided to try Oil Analyzers/Polaris and do a comparison. The cost difference wasn't much, but OA was a little cheaper when several tests were purchased together through Amsoil.

Oil was collected as close together as possible during the drain, literally back to back in mid-drain. In hindsight I should have mixed the samples and divided to try to guarantee they were as close to identical as possible, but I did not. They were mailed the same day (10/3) and OA results were emailed to me first on 10/14. Blackstone results took another 6 days, and were emailed on 10/20. I also received a paper copy from OA later.

Sorry for the poor copy of the OA report. I couldn't redact it in Adobe as I could the Blackstone, didn't get a good scan of it, and was too lazy to go back and do it again.

While many things are very similar or the same, here are the differences:

I have mixed thoughts on the differences. OA found some stuff Blackstone did not, but generally when the differences were more than 1 or 2 ppm, it was Blackstone with the higher numbers so maybe their testing is a little more sensitive? Or maybe my samples weren't identical? Of course the fuel dilution and TBN differences are noted and somewhat concerning. I tend to believe OA's fuel dilution is more accurate. As for TBN, both use D4739, so I am not sure why the difference is so great.

I'm coming up on 4k miles now and am thinking about doing a second change and having it analyzed, too. What can I say, I'm curious. Not sure if I will use both labs or not this time, but I do think I will do this again at some point.

Hope this info is helpful to someone. 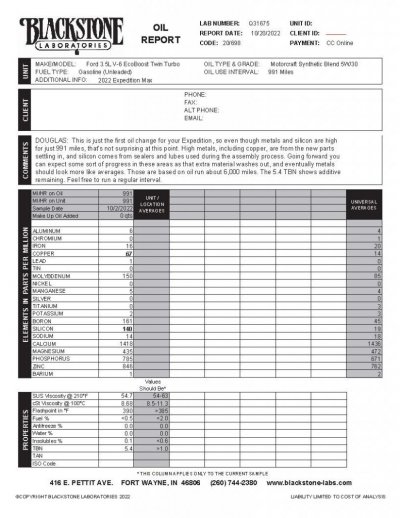 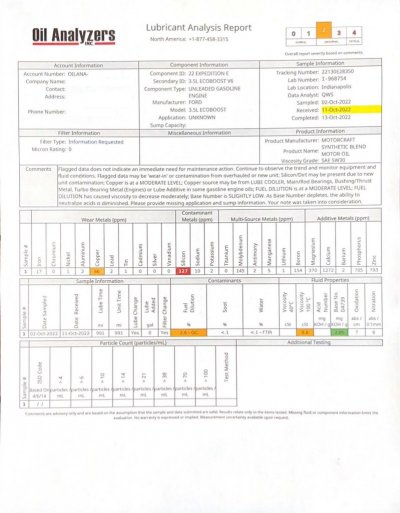 I always use synthetic oil like Penzoil Ultra or Platinum and change it every 5k miles. I dumped my factory oil at 1500 miles since oil is cheap
OP
OP

Forgot all about this thread!

You must log in or register to reply here.