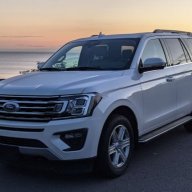 Just got back from a trip where we towed our 27' boat from Port Clinton, OH to Lake Cumberland, KY, and back. I bought the 2018 Expy specifically for the task of towing a large boat.

TL/DR:
I've been making this trip all my life and I'm comfortable pulling a trailer, dealing with wind buffeting off semis doing 85mph down the big hills. The Expy had plenty of power and was solid-footed - I didn't experience any harrowing moments caused by wind sway like I have in the past. I was able to comfortably set the cruise at 70 and let the truck do the rest of the work. Gas prices are crazy so I kept finding semis that were doing just slightly less than me and I would draft off of them. All-in, the computer says we averaged 14.1mpg(!!) on the way down and 13.6 on the way back (traffic in Cincinnati slowed us down a bit).

My truck is a 202A with HD Tow and every other option possible at this level except the LEDs. I have the 20" wheels as well, and the truck just crossed 51k miles. I bought a new set of Pirelli Scorpion AS Plus 3 (275/55/20) at the end of June in preparation for this trip. The factory Hankooks 1) Were terrible generally 2) Had 50k miles on them which enhanced how terrible they were, and 3) Only had a load rating of 113T. I picked the Pirelli's from Sam's Club because they are the highest rated on a popular site that has racks of tires in the AS class, they have a 117H XL load rating, and they (only) cost $913 out the door. The only issue is that these are special-order tires. Having read a couple threads on here about total weight capacity, I determined that a key factor in the total capacity is the tire load rating. Knowing the weight of my boat, I wanted a heavier-rated tire that wouldn't be terrible for the 99% of our driving that is to and from grocery store, hockey practice, or hockey tournaments in Michigan. My mileage improved from high 17's to mid 19's for the two weeks I had these tires prior to the trip, road noise is down, and the general feel is much better than the factory Hankooks.

I did a bunch of homework on capacity leading into this trip, including the 3-weigh gold standard, plus a fully-loaded weigh on the return trip. Numbers:

Couple thoughts here on the numbers:

1) The first three weighs all came within 10 minutes and all on the same scale. I don't understand how the steer and drive axle weights could be this different for the second two measurements. Truck with Tongue Load means the trailer was hooked up to my truck, but the trailer axles were not on the scale. Truck and Trailer was the same setup but with the trailer on the scale as well.

2) The Truck and Trailer, full load weight was taken on the drive back with the boat attached, all four people in the car, and all our gear.

3) Knowing I was going to be up against the limits, I installed a WDH for the trip - without this I would have probably exceeded my rear axle rating (4380#)


As we embarked on the trip, we were lucky enough to get a flat tire one mile from the boat storage location. I say lucky because it happened before we were hooked up to the boat and before we were towing. I don't remember hitting anything, but the right rear tire has a 1" slit on the inside wall that is unrepairable. Luckily, we have a full size (so I thought - more on this in a minute) Wrangler spare, so I used this as an opportunity to teach my 13yo how to change a tire. After changing the tire, we picked up the boat and started the main portion of the drive which is almost entirely I-75.

I-75 is mostly flat North of Cincinnati, but between about Touchdown Jesus (Lebanon, OH) and the Mt. Vernon exit in Kentucky its mostly medium grades with maybe 2-3 "big" climbs. I filled the tank before we picked up the boat, then again just North of Dayton (we were not empty yet), but those two tanks were all I needed to make the drive down.

The drive home we averaged 13.6, and unfortunately had a more eventful drive. We came through Cincinnati around 4:00p and hit early rush hour traffic which had us doing 5-10mph by the GE factory which is a slight but long grade up (when going north). Out of nowhere, the "Electronic Limited Slip - Reduced Torque" message popped up on the driver info screen. I had my wife do some quick googling, but I figured it was heat related since the outside temp was also 88 degrees. Her search found this link:

So, we pulled off the freeway for a break and to give me a chance to search this forum to see who else has seen this issue. After reading the message above and knowing I had a 'full size spare' installed, I used an online calculator to compare the 275/55/20 outer diameter on the new Pirellis vs. the Wrangler "Full Size" spare, which is actually a 265/70/17 and found that the Wrangler was actually .3" smaller than the Pirellis. The ELSD warning never actuated on the trip down, so I'm not sure if this is enough out of spec to be the problem but it definitely wasn't helping. I think the combination of ambient temp, 14580# GCWR, and "undersized" spare all conspired to cause the message to pop up. While researching this forum over a milkshake from Big Boy, I developed a couple options:

1. Hurry up and wait. Do Nothing other than let it cool down.
2. Find a tire shop that has a 275/55/20 in stock and buy that (I'd have to find one that has the same OD as the Pirellis).
3. Rotate the right front Pirelli to the right rear, then move the Wrangler to the front. This would ensure that both rear tires were the same size, but would have required me to disconnect the trailer (to be able to safely jack the truck up), followed by a tire juggling act (using the "flat" Pirelli) to rotate the tires, then having to reconnect the trailer/WDH setup. This seemed like the best option, but I was dreading the fiasco this was about to become when I came up with the best idea:
4. Deflate the left rear Pirelli by about 10psi to reduce the OD a bit and get it closer to the Wrangler.

Between #4, the 45 minute break, and slowing down to about 62mph, the ELSD warning never popped back up and the rest of the trip home was uneventful. I'm not going to lie, I was thinking that its time to switch to an F250, but the Expy is mostly driven by my wife and I just can't see her enjoying a real "Truck" as much as she likes the Expy.

Now that I'm home and have done some more reading on this warning, I think a diff fluid change is probably in order because I intend to keep the truck indefinitely unless the new Excursion actually happens. I'm replacing the Pirelli tomorrow so I'll be back to all four wheels being sized equally.

Anyone knowledgeable have an opinion/thoughts on the ELSD warning? I'll search the forum for for a how-to on the process for changing the diff fluid and will create one if it doesn't already exist. Hopefully this writeup is valuable to someone! 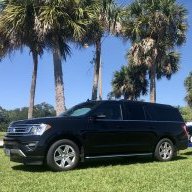 Another option may have been to pull the fuse for the eLSD which I think would make it perform like a regular open diff. I’m not sure if this would throw other codes.
Z

I haul my 7200 lb boat a little over 1000 miles on vacation each summer with my '18 Limited, and after the suspension mods to the rear I'm perfectly happy with the towing. Much like your notes above, I find it to be a very capable tow vehicle. I had a blowout on the trailer on 95 in SC last year at 2:00 AM. Truck kept it firlmly planted throughout. No argument that the Expy did it's part in keeping it to a low stress event.

However, your gas mileage is unbelievably better than mine. Granted, we're running I-95 speeds for most of the drive, but I usually average about 9 MPG for the entire trip and that is running premium. Going to sting a bit more this year with gas prices being what they are.

Glad your trip went (mostly) well for you.
D

I haven't looked at the diff on these but they either have a drain plug with makes is super easy to replace the fluid, just pull the plug and drain it and then refill with the proper stuff (I would get it from the dealer, also don't know if these need a friction modifier)
If there isn't a drain then you either pull the cover, or use a vacuum pump (cheap from Harbor freight) to suck as much out as you can from the fill hole. If you suck it out just replace what ever amount you removed with new. Popping the cover isn't a bid deal but is more work, needs gaskets or rtv, and more potential for slight leaks if it doesn't seal up perfect.
G

I drive faster than average.. 80 on interstate most of the time. Average 17mpg... I have a small 14 ft V nose trailer. empty or just some load drops me to 8.. 9 MPG.
You must log in or register to reply here.